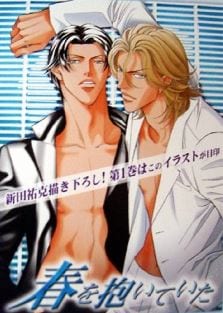 Plot: The adorable and attractive main characters of Haru wo Daiteita are Kyousuke Iwaki and Youji Katou who are both in the film industry, having starred in various adult video films and are trying to climb the ladder of success and become greater actors. Iwaki is accepted to star in a popular movie, having beaten Katou in the auditions. During their time together, Katou believes he is in love with Iwaki-San, who on the contrary refuses to believe that he is in love. It is later on that another gay actor comes back to Japan and co-stars with Katou that problems starting arising. And it is from then on that the two realise where their hearts are set.