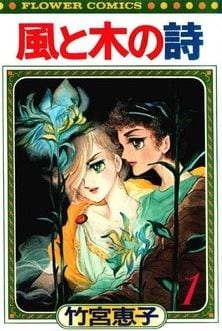 Plot: Serge Battour is the son of a French viscount and a Romani prostitute, and despite his kind nature and academic talent, is shunned by his family and his peers due to the color of his skin. He begins to attend Lacombrade Academy, his father’s alma mater, in the hopes that there he will find a place to belong.

Gilbert Cocteau is, like Serge, the orphaned son of a wealthy family, and is infamous at Lacombrade for his beautiful and delicate appearance, lack of dedication to schoolwork, and habit of prostituting himself to other students. He has no intention to connect with any of his classmates, instead devoting himself to his uncle Auguste.

Due to a shortage of living space, Serge and Gilbert become roommates even though Gilbert’s antisocial nature has in the past made it impossible for him to room with anybody. Serge, being sociable and idealistic, is determined to be friends with Gilbert; Gilbert is only interested in either being able to manipulate Serge or push him away entirely. To the surprise of both of the boys, however, the two eventually form a deep, albeit generally dismal, bond that leads to a romantic connection.